Taking the square root of -1 presents a conflict with the rules for multiplying signs. Mathematicians get around this by defining the square roots of -1 as +i and -i. +i squared is -1 and -i squared is also -1 . They then apply the same sign multiplication rules to +i and -i as they do for +1 and -1. However, these so-called imaginary numbers are actually conforming to sign multiplication rules mirror opposite to those of the real numbers: (+ x + is -) and (- x – is -). 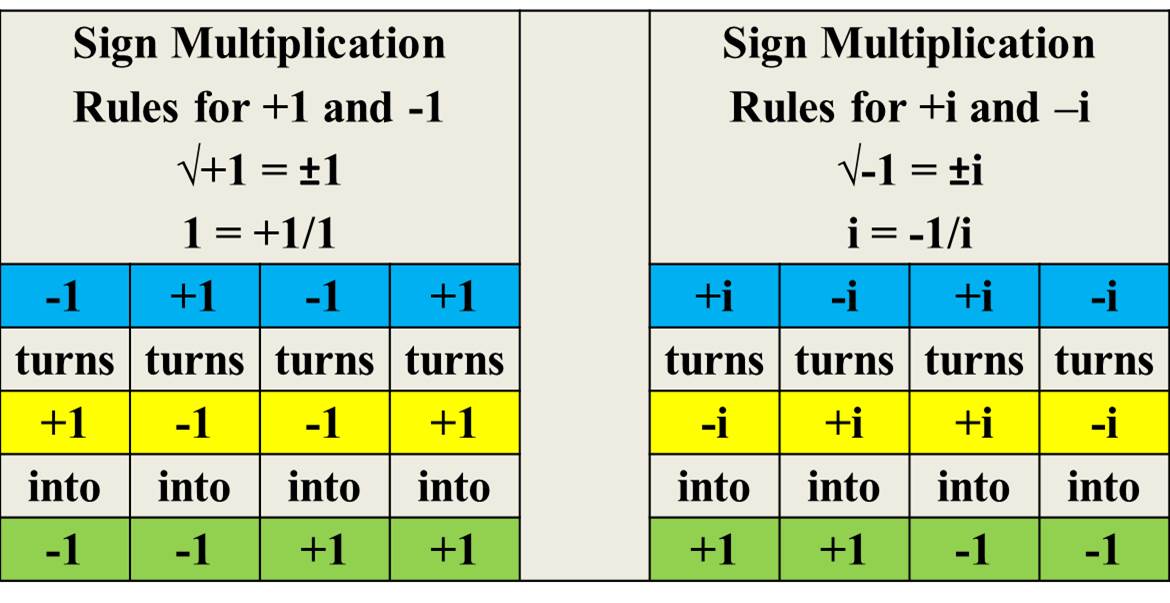 Multiplying a number by itself to afford its square, like drawing a distinction between a number and itself to afford zero, enables meanings to be assigned to the products of the operations, but also creates a logical problem. In the real numbers, + means the same and – means different. In the imaginary numbers, + means different and – means the same. The first is operating in Boolean XOR and the second in Boolean XNOR. The use of the terms “real” and “imaginary” is deceptive. It implies that one kind of number is found in the real physical world, while the other is abstract. What is actually happening is perceptual switching between XOR and XNOR. Representing “complex” numbers on an Argand diagram, on a complex number line projecting from one absolute origin, messes with your head! There is no one, absolute zero.

In the new mathematics, this will not stand. When two numbers operate on one another, even if those numbers are the same, the result must always be two numbers. When a number mutually negates with itself, it affords two zeroes, one from the perspective of each side. When a number is multiplied by itself, it affords two numbers, one from the perspective of each side. The interactions between the numbers are non-commutative: one acts in Boolean XOR and the other in Boolean XNOR.