Mathematics is performed using physical identifiers tethered to intangible meanings (e.g. the symbols 1 and 0 tethered to the meanings distinct, countable and same, not countable). This fact can be appreciated by comparing and contrasting what happens when some of the objects are removed from a boundary, as in subtraction. For example, consider the subtraction of two objects from five objects to leave three objects, as shown in Fig 2. 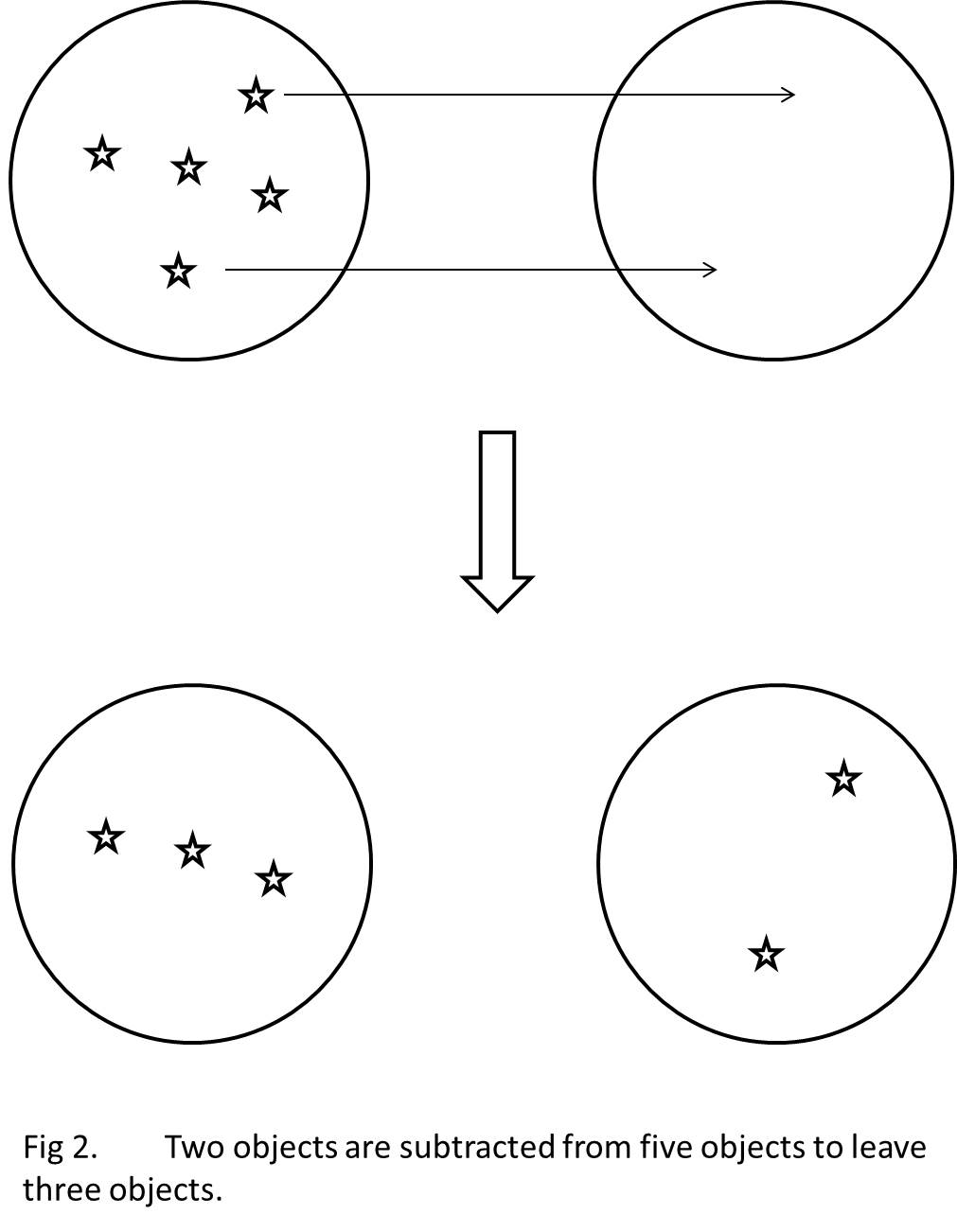 We can represent this in columns of 1s and 0s as shown in Fig 3. It is as if 1 and 0 form two sides of coins, some of which are turned over. 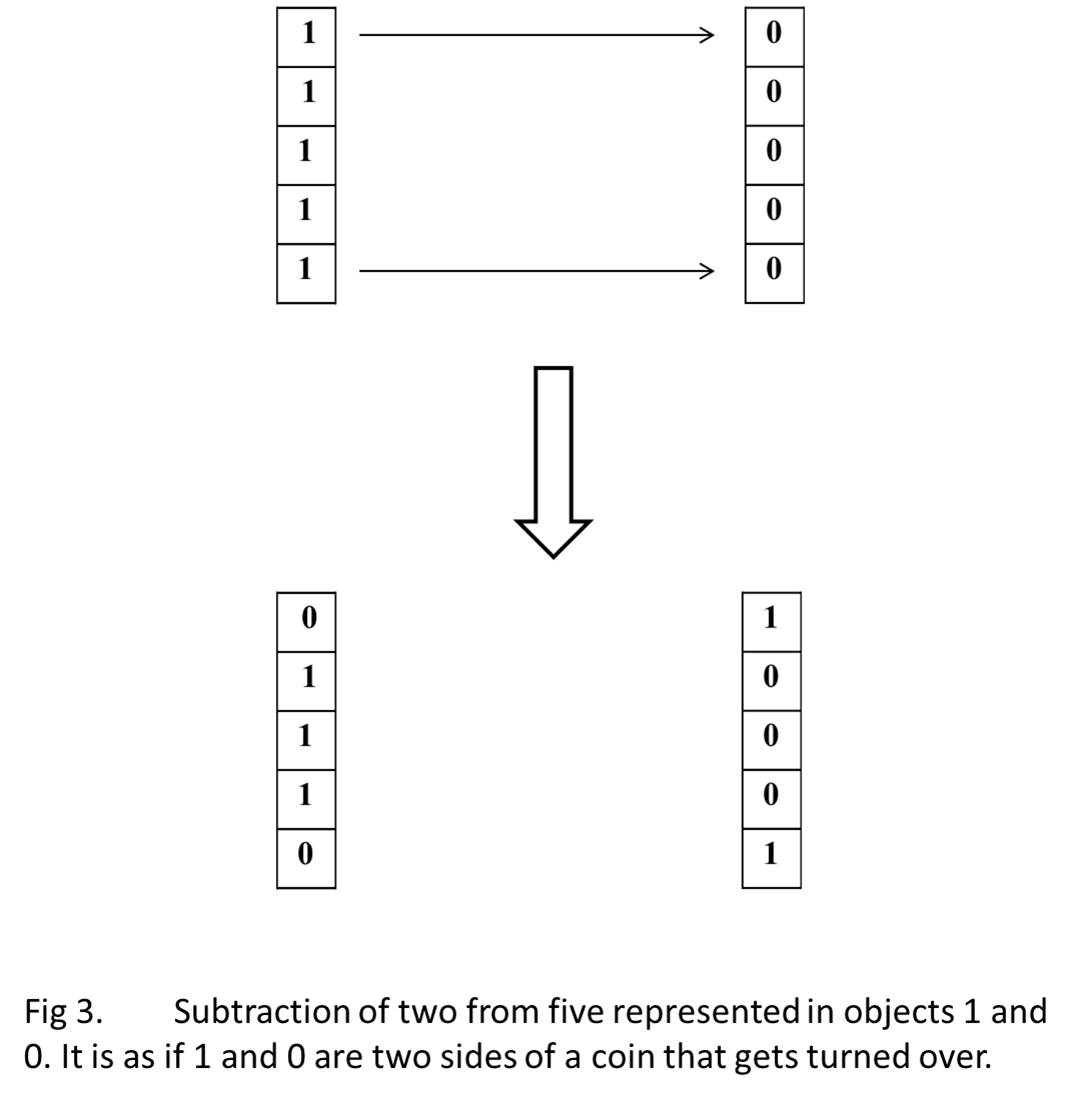 Up to this point, the counted number of 1’s is the same as the counted number of stars. However, mathematics takes advantage of the meanings defined for 1 and 0 to enable the subtraction process to be performed in a different way. Instead of simply moving objects, we represent the subtraction process using ordered pairs of objects. We reproduce objects being subtracted in a column on the left and objects being added in a column on the right, then cancel down left, right ordered pairs of 1s to afford a pair of 0s, taking advantage of the definitions of 1 and 0 as distinct and same. This is illustrated in Fig 4. 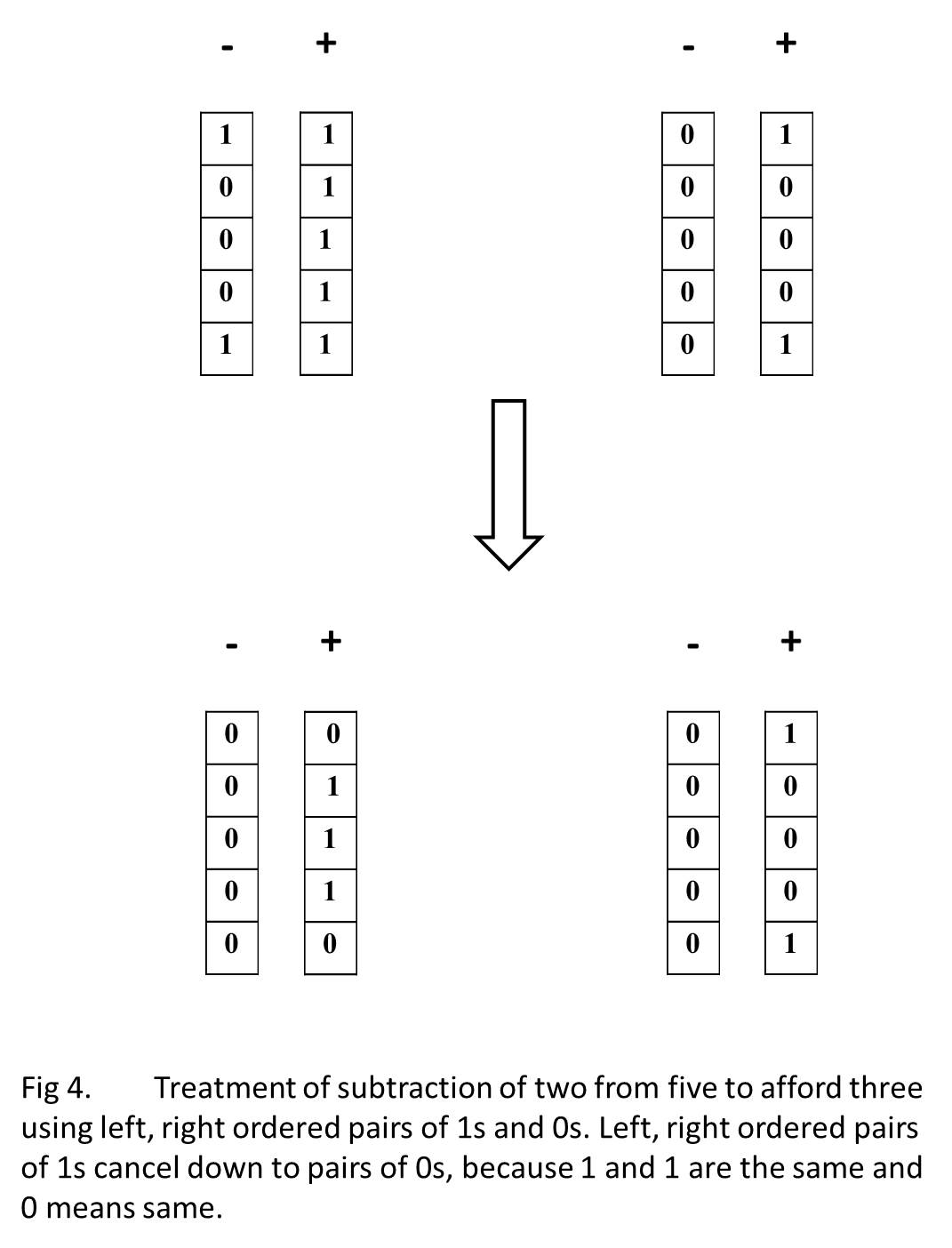 Wherever we are living, we are all doing the same thing! The entire global financial system works in this way. For example, if a person owning five stars worth $1 each sells two of them to another person financed by a bank, the bank creates, out of nothing (0, 0), $2 of money for the seller (0, 2) and $2 of debt for the buyer (2, 0). The process is the reverse of cancelling down two ordered pairs of 1s to afford two ordered pairs of 0s.

Working with the two objects 1 and 0 where 1 means distinct and 0 means same, the order in which operations are performed does not matter in the mathematics, but does matter very much to people who have a bank account. Paying off a debt of $2 (2, 0) affords zero (2, 2 = 0, 0) the same as spending $2 (0, 2), but being in debt is a wholly different experience than being in credit. In conventional arithmetic, the order in which oppositely signed integers negate does not matter: +1  -1 = 0 = -1  +1. This is how equations work: 1 = 1, so the difference between 1 and 1 is 0.

Using equations breaks the symmetry of relationships, because the order in which processing steps are performed matters.

The assignment of the meanings distinct, countable and same, not countable to the physical objects 1 and 0 is arbitrary. The meanings of the two objects could easily be reversed. This would be equivalent to turning over all the coins having 1 and 0 for their sides in the examples given above. We would then have +0  -0 = 1 = -0  +0. An ordered pair of 0’s would cancel down to a pair of 1s.

To restore the symmetry of relationships, we need to work with both together, so that the order in which the processing steps are performed does not matter. What is done on one side is done in mirror image on the other.