Equations were invented by a bilaterally symmetric life form that evolved in a gravitational field. As it started to get its act together and develop socially, this life form developed tools through which it could handle the exchange of resources. One such tool was a pair of weighing scales.

Weighing scales are bilaterally symmetric like the life form. They consist of two pans positioned equidistant from a pivot. When weights on each pan are the same, the scales rest horizontal (balanced). When weights on each pan are different, the heavier weight tips downwards relative to the lighter weight. Gravity draws no distinction between left and right: it is symmetric. However a bilaterally symmetric life form draws a distinction between left and right. When the pan tips due to the weights on each pan being unequal, the life form observes a pan on one side tip relative to that of the other.

Mathematics: the signed integers, zero, equations and double entry bookkeeping have all developed out of careful analysis of this simple tool. 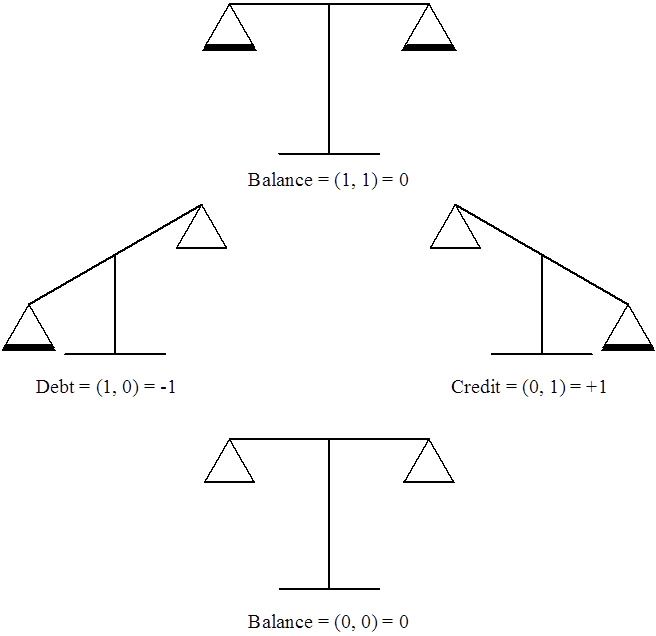 Equations, the signed integers and zero are now the bedrock upon which mathematics is constructed. This website seeks to prompt the reader to reflect on this and ponder whether, for all its immense achievements, mathematics is now being held back by a belief that developed in the mind of a bilaterally symmetric life form that evolved in a gravitational field. Could it be possible to construct better models of how the physical world works using only ordered strings of just two meaningless polarities?