This section describes how the new mathematics could be used in decision making, including referendums, dispute resolution and the election of representatives.

Democracy is perhaps one of mankind’s most precious inventions, but sometimes elections and referendums produce outcomes that do not accord with the actual wishes of voters. A candidate or option attracting the most votes may actually be opposed by a majority of the voters, but will gain power or be selected in the absence of a better way to measure voters likes and dislikes. Moreover, there is no way for voters to signal preference for a candidate or option that has not been listed in a ballot, biasing the results of a vote in favour of the views of those who set up the lists. In some extreme cases, these complications can lead to civil disobedience and violence, provoking a repressive response that undermines future democratic decision making.

The new mathematics enables the likes and dislikes of voters to be revealed in a new way. Voters can separately look at a list of candidates or options from the viewpoint of which they most like and which they most reject. They can also signal whether or not they are passively or actively abstaining when looking from each viewpoint, thus enabling them for example to reject all candidates or options on a list.

Prototype: Example of a vote run by a school on an election day.

This table provides the actual results of the 2015 General Election alongside those obtained with a chiralkine vote taken by a  school on election day. 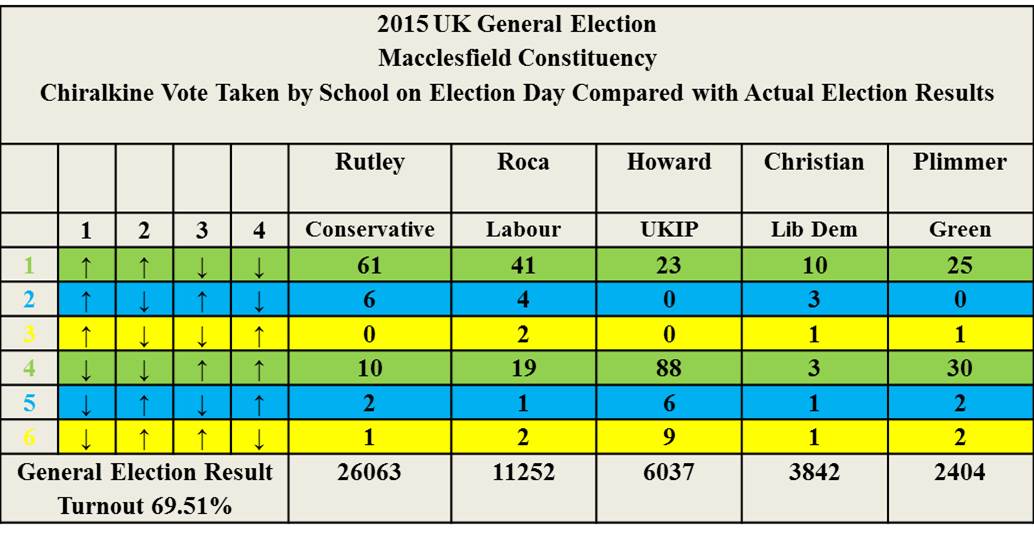 The results of the chiralkine vote broadly follow those of the general election, but the chiralkine vote separates out voter’s likes and dislikes, and takes account of passive and active abstentions. What comes through very strongly from the chiralkine vote, but not from the actual election result, is how strongly young people were opposed to the UK becoming independent from the European Union (BREXIT). Since the subsequent UK independence referendum, the UK has been politically divided and economically weakened. Performing the referendum using a chiralkine system, which would have permitted voters to reject the question on which they are being asked to vote instead of deciding yes or no, might have avoided much of this division and the associated economic costs. Here is an example, which you can try voting on. The same could be the case for Scottish independence.

A good decision (or product in a marketplace) is the one that is most attractive viewed from one side and least objectionable viewed from the other.